Meaning is an illusion, yet in our brains it’s real.

L&M: As is evident in your work and your interviews, you have a really strong desire to explore how meaning can change and how people take meaning from stories. Where does this originate from?

AN: It just feels like for me, when you dig down into anything, that’s where you end up. Meaning is an illusion, yet in our brains it’s real.

L&M: Of course, some people would contest that. A lot of people don’t come to the same conclusion.

L&M: On that note, you said about the characters in Big Questions, regarding their take on the plane crash and the meaning of it all, that all of your characters were “wrong,” with the exception of the “Idiot” character, because he experienced the world as is, without analysis or judgement.

AN: Yeah right, which is my statement on that question. There isn’t any meaning in the world. I mean we all grab on to something to ground ourselves, but it’s all just detritus floating in the ocean. Maybe I shouldn’t try to explain it. That’s the critics’ job, not mine, right? (laughs) But to me, that just feels like the most basic fundamental question of how our minds work and why they work and why we do what we do. I mean of course, lots of people are not interested in that, but it’s like, even when I read Tintin books or X-Men comics or when I watch The Avengers movie… In my head all that stuff is about this too, just in a more or less clear, honest way. To me that’s what the world is about, so of course I want to make art that highlights it, and points to it.

Maybe one way that I can connect that idea differently is also because of my family connection to it, to religion in particular. A lot about what religion is about is finding meaning in stories, trying to describe the universe and life through stories. [Which] my family, my grandfather and my uncle have been a part of, and my mother.

L&M: But your dad was an atheist, or was he an agnostic?

AN: My dad is kind of an agnostic, my step-dad’s an atheist. So right there, there is that contradiction within my personal history, but then also, it’s like studying as a student, studying art history, it’s pretty obvious that the history of art is deeply tied to the history of religion. Before there was much of an economy it was important enough for certain people to hire artists… Like the only thing they got hired to do was to depict religious stories, stories about how people thought the universe worked.

L&M: You could argue that it was created in earnest, or as propaganda. Or both.

AN: Yeah, I guess I would say it’s both. Just like I was talking about before. Art has always had a status display function, so certainly it was that and it was in some ways propaganda, though I don’t think it was very useful propaganda in the sense that a lot of people had no idea what the stories were. I mean people couldn’t read the Bible, so they actually didn’t really know what the stories were.

L&M: But they were still awed by the artistic depictions and splendor.

AN: Right. Which points to the kind of power the patrons had, that they had that much disposable income, basically. So yeah, definitely that was a part of it, but some of the actual artists themselves were pouring their own heart and soul into it you know? They were really trying to do what they could to honor Jesus and Mary or whatever in the most honest sincere way they could. So, I don’t know, like of course I do make art about other stuff too, but yeah, I don’t know. when I listen to Louis C.KLouis C.K. do standup, that’s what he’s doing art about too. I think even artists that say that they’re not, I think they kind of are. (laughs) There are other proximate subjects, but that’s the ultimate point of it. 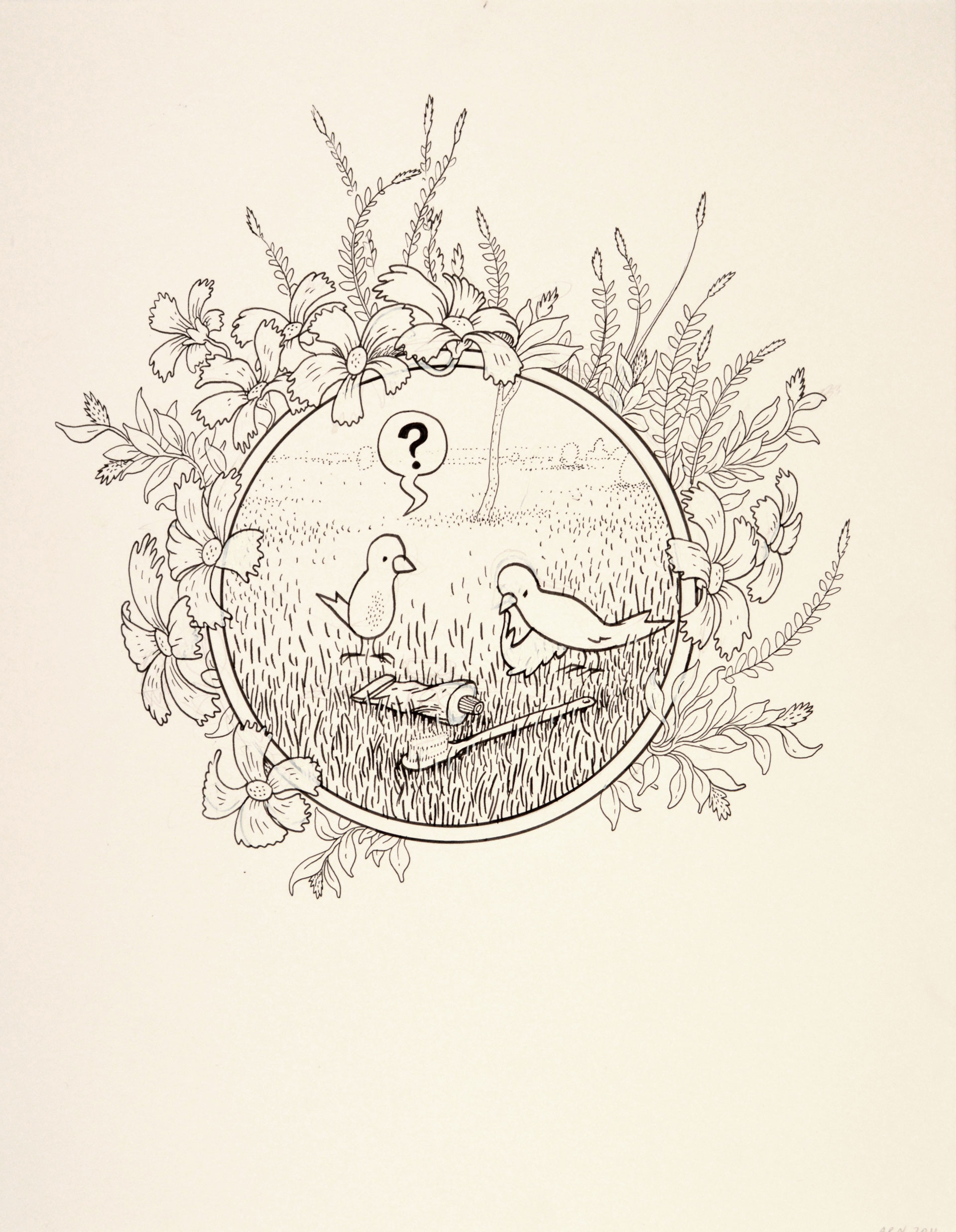 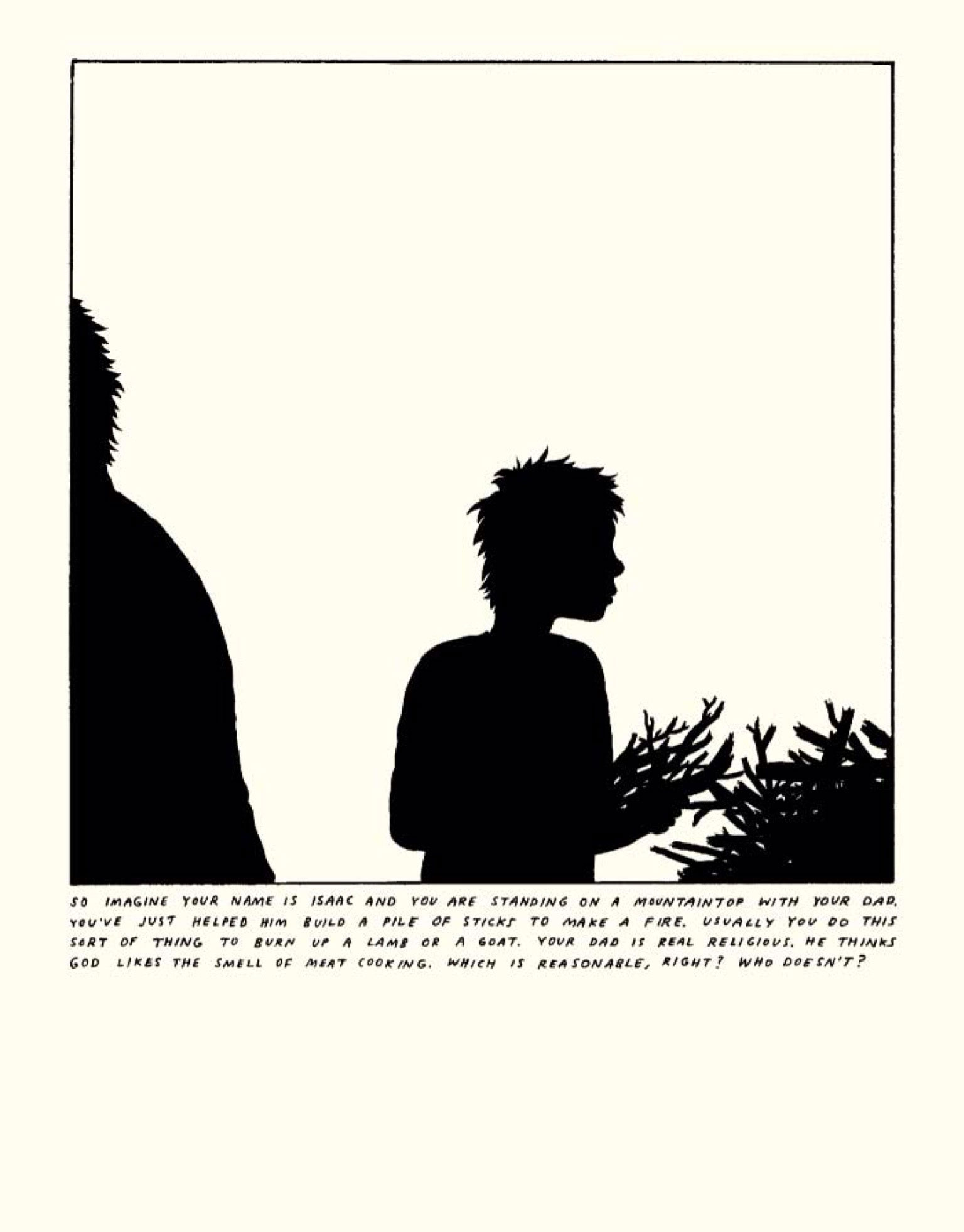 The Story of Abraham & Isaac from Anders Nilsen’s “Rage of Poseidon.” (Drawn & Quarterly, 2013) 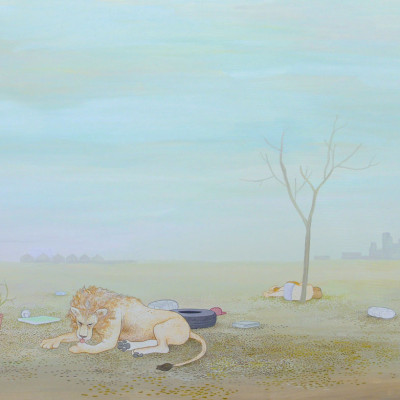 Anders Nilsen, “Adam and Eve and the Lion of Saint Jerome.” 2004. Gouache on board.

Anders Nilsen, New York Times Illustration, “Toward a Conceptual Framework for Understanding Your Individual Relationship to the Universe in Four Simple Diagrams.” (2014)

I would like to make work that helps people think about the world in a way that is a) not a bunch of bullshit, and b) meaningful.

L&M: In much of your work there is a sense of being lost. It’s very specific in Dogs and Water, but there’s also this undercurrent in Big Questions and Don’t Go Where I Can’t Follow and others.  Is this feeling of being lost tied to a personal journey to find meaning in a universe which, as you said, doesn’t have any? If you don’t have religion to fall back on for meaning, then are you trying to create it through your drawing and stories?

AN: Yeah, trying to figure out how to embrace being lost and accept that. At least if you are saying you’re lost you’re being honest. If you’re saying the Bible is the truth or some political agenda or some specific, contained philosophy is the truth and if we follow that then we will no longer be lost, well, sorry, you’re still lost, you just aren’t aware of it, you know? You’re just not admitting it.

AN: Yeah, lately I have been thinking about that in terms of [whether] it is possible to create stories or artworks or art experiences that can replace the functions that religion have had, to the extent that those functions are actually positive. That’s partly what I was trying to do with that piece in the New York Times. And I recently wrote something that I read at my grandmother’s funeral. I wanted to say something about death, and construct a kind of story that would be based on things that are actually real and verifiable but that would still be a compelling story that would help people place themselves in the universe and in life and death in ways that would be meaningful, and for lack of a better word, comforting.

L&M: You were assuming the role of minister, so to speak, but replacing the typical narrative of life after death and going to heaven with a secular alternative in the hopes it would resonate with some of the attendees. However, I’m sure you pissed other ones off.

AN: (laughs) Well, and that was the thing, I’m pretty sure there were a few people in the church that probably were pissed, but overwhelmingly, so many people came up to me afterwards to say thanks and to say I’m glad somebody said that. And that’s in a family that has this intensely Lutheran history, so I think there’s a hunger for it. Stories are really helpful. They are really important. Like I said before, our brains demand them. So there’s no reason you can’t come up with stories that take the real world, and how things actually are, and create meaning out of that, rather than making up fairy tales. I like fairy tales, too, but I think its important to understand what they are.

L&M: Is that your ideal role as an artist then, to be successful at doing just that?

AN: Absolutely. I would like to make work that is really meaningful and helps people think about the world in a way that is a) not a bunch of bullshit, and b) meaningful.

L&M: It must be a challenge to try to introduce an alternative way of thinking of things without being overly pedantic, otherwise you risk the aforementioned pitfalls of the religious narrative.

AN: Yeah, I certainly have that impulse and probably in Poetry is Useless that comes up more. I’m aware that telling people they’re full of shit is not helpful (laughs) and they’re not gonna hear it. But I do have that impulse as well and so I end up turning it into a little bit of a joke, but a joke with a barb in it. But, you know, different kinds of expression work in different contexts. So that works in a weird art book. Like I definitely wouldn’t do that at somebody’s funeral. (laughs) 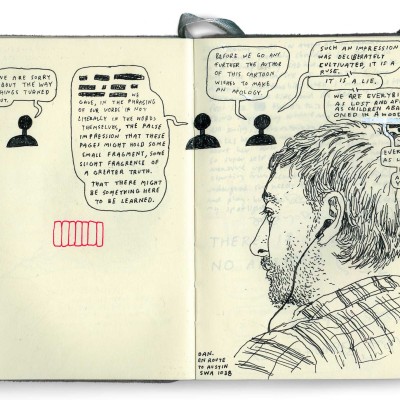 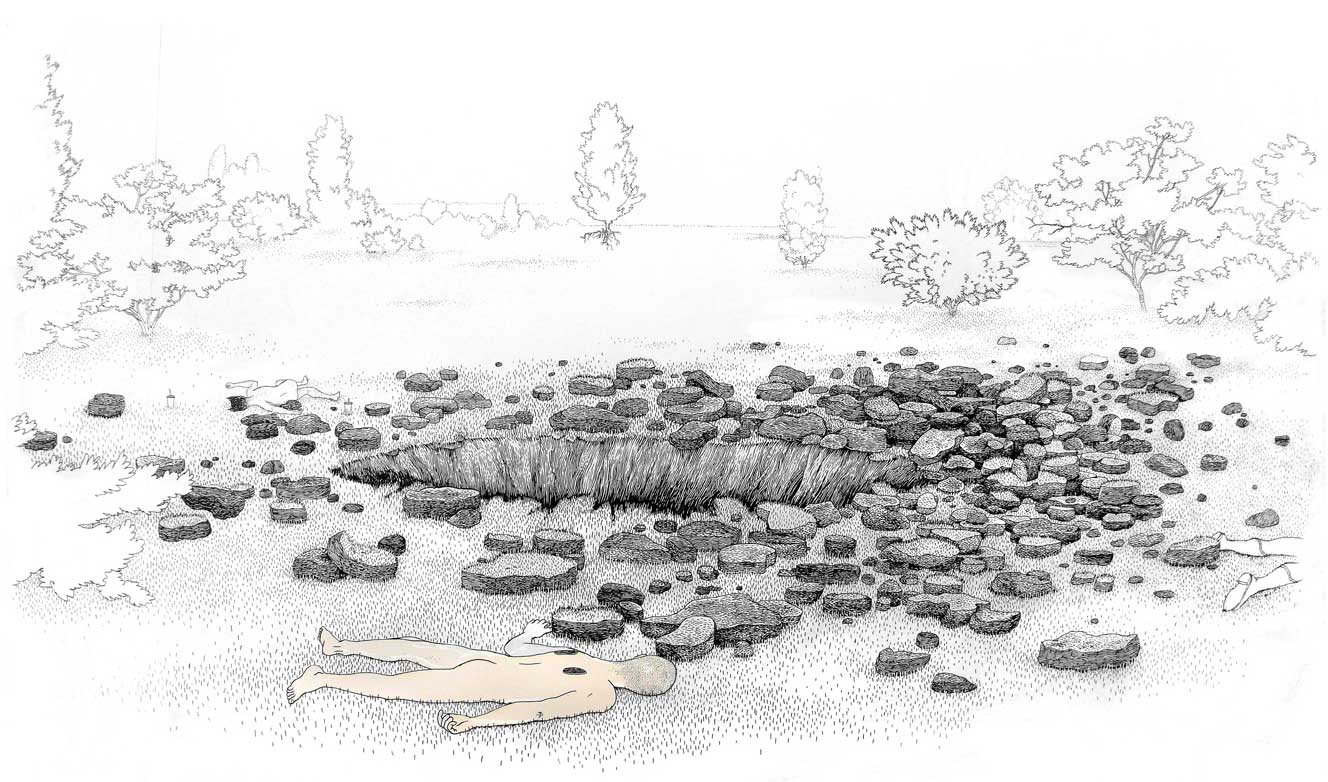 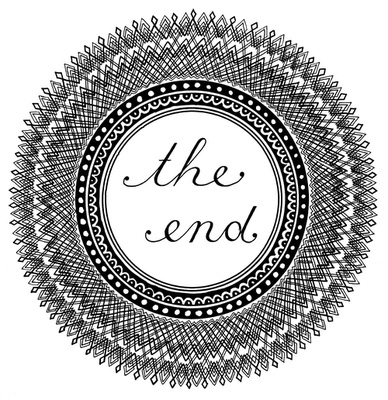