Everything I do is drawing. Drawing is everything. 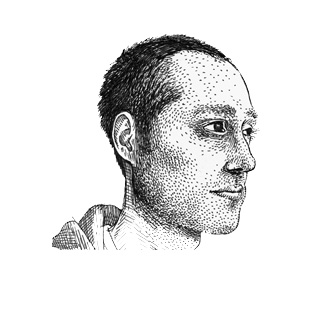 A storyteller and humorist at heart, Anders Nilsen uses the medium of comics and the graphic novel to examine the most fundamental of philosophic questions: What the f*&k does it all mean? Beginning his artistic journey as a painter and an obsessive skateboarder, Anders Nilsen began self-publishing his philosophic ponderings in the form of an alternative comic called Big Questions in 1999. The story was serialized by Drawn & Quarterly and finally published as a complete book 12 years later. The book garnered an Ignatz Award, the Lynd Ward Graphic Novel Prize Award, and it was listed as one of the New York Times’ 100 notable books of 2011. Along the way, he published Dogs and Water, Don’t Go Where I Can’t Follow (both of which also won an Ignatz awards), The End, Rage of Poseidon, and Monologues for the Coming Plague. His most recent endeavor is Poetry is Useless (Drawn & Quarterly, 2015), an utterly unique sketchbook format which lovingly jabs at just about everything from God to Capitalism. It’s also probably worth mentioning his features in MOME, Kramers Ergot, the Best American Comics Anthology, Interview Magazine, The New York Times and the Utne Reader. Nilsen is the co-founder of Autoptic, a bi-annual festival of independent comics in Minneapolis and he is also an organizer for the comics residency, Pierre Feuille Ciseax. Anders Nilsen lives and works and skateboards in Minneapolis.

Special thanks to Anders Nilsen and also to Julia Pohl-Miranda and Alexandra Auger at Drawn & Quarterly.